How to treat Rosacea

How to treat Rosacea

How to treat rosacea 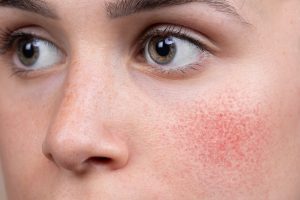 Rosacea is more common than most people think, usually mis-diagnosed for acne or even eczema. It is a skin condition that causes inflammation of the skin cells, causing the sufferer to look flushed. If the condition is left untreated, small cysts and blood vessels appear in the affected area, along with thickening of the skin.

It primarily affects Caucasian women in their late 30’s with European heritage, however, males that suffer from rosacea have more severe symptoms than females.

The Four different types of Rosacea

Most people don’t realise that there are four different types of rosacea,

The most recognised symptoms for rosacea are:

Because the skin is irritated and swollen, it can become dry and cracked, causing it to feel like it is burning.

There isn’t a defining cause for rosacea, but recent studies have found the below to be some contributing factors:

What causes Rosacea to become worse?

Due to rosacea being caused by environmental factors, as well as genetic, and the immune system being affected, there are many things that can make the symptoms worse. These can be things that can cause an increase in skin and body sensitivities. Most commonly dairy, spicy foods and alcohol. Hot drinks, especially caffeine, naturally cause the face to flush so increases the redness in rosacea sufferers. Other common causes are sun exposure, exercise and strong winds. 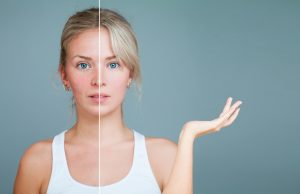 Treatment options depend on the severity of symptoms and the type of rosacea you suffer from. Your doctor will tailor your treatment, using either a combination of oral or cream-based medication. Both are used to reduce the redness in the skin and any acne-based symptoms, to help eliminate the bacteria causing the cysts. Anti-inflammatory medication will also be prescribed to help reduce any swelling.

Laser treatment can be advised to help reduce the appearance of blood vessels as well as LED light therapy to help relieve the redness in the skin.

Aside from medication, you can make changes to your skincare routine and your lifestyle to help reduce the number of flare-ups.

Don’t use harsh masks & cleansing products that cause the face to become sensitive and red by stripping dead skin cells. When you do wash your face, avoid rubbing it dry as this pulls at the skin making it prone to sensitivity. This is also caused by hot showers, causing inflammation and drying the skin, which can kick your oil glands into over-drive increasing the number of cysts to form.

Increased sensitivity in your skin means it is more important to protect it from harmful UVA/UVB rays. Making sunscreen your number one friend, keep it above SPF 50 for optimal protection. When choosing a sunscreen, choose ones made from natural ingredients, not chemical based.

About the Author: Alice Mihalache